Today my friend, Tiff, tagged me on FB and told me she wanted to learn to smock an apron.  I realized that I hadn’t posted this yet, so here you go, Girl!!!!

The first item is a 16th century German pleatwork hemd, or smocked shirt (Image 1).  The shirt was considered to be an undergarment and was primarily to keep body oils from getting onto the outer garments.  The second item is a 16th century German pleatwork halbrock, or half-skirt apron (Image 2).  For ease of use, I will refer to the hemd and halbrock as shirt and apron for the duration of this paper. (Textiler Hausrat, 1990)

Although these particular entries are 16th century, they were used in the 15th century, particularly in Italy, Germany, Switzerland, England and Spain.  While this style of shirt would be worn by both men and women, I made this particular shirt for myself.  The pleatwork on this shirt is more common to the middle/lower classes and particularly the Landsknecht (German and Swiss mercenaries) and Trossfrau (their camp followers) (Image 3).   The higher class pleatwork shirts would use much more fabric, have tighter pleats and be decorated with more elaborate embroidery/pleatwork (Image 4).  This style of pleatwork is correct for my early 16th century Trossfrau wardrobe (see images 1, 2 and 3).  There are several styles of pleated shirts depicted in this time period showing variations of the neck as closed, or open.  As I am not sure if I will even like wearing the high-necked shirt, I chose to leave the neck open. Should I decide later on that I wish to close it, I can attach two sets of ties to the edge of the collar to secure the neck.

The apron had two uses in 16th century Germany: to keep the dirt from soiling the outer garments and as a decorative part of women’s clothing (Image 5). Aprons were worn in this period by all marriageable women while working inside the home, venturing  outside the home and to formal occasions. The submitted apron has been decorated more than the Schurz, a purely functional apron, but less than the valuable Frauenschurz. (Textiler Hausrat, 1990) The higher the status, the more ornate the pleatwork, embroidery and drawn-thread work would be on the apron.   The style of apron represented here would have been worn by women in the middle and lower classes, as well as in the Tross.  It is representative of that of a seamstress, wife of a craftsman, or wife of a Landsknecht officer. 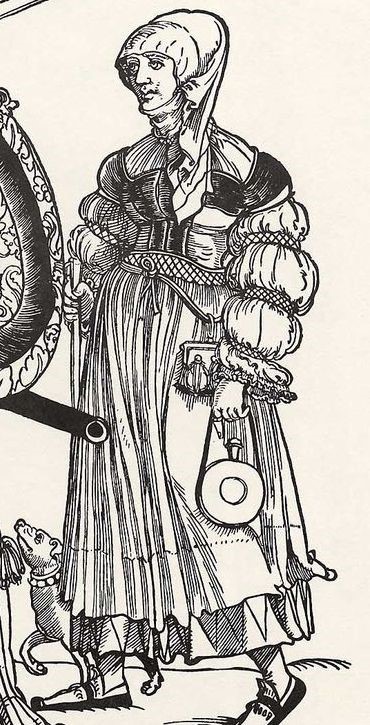 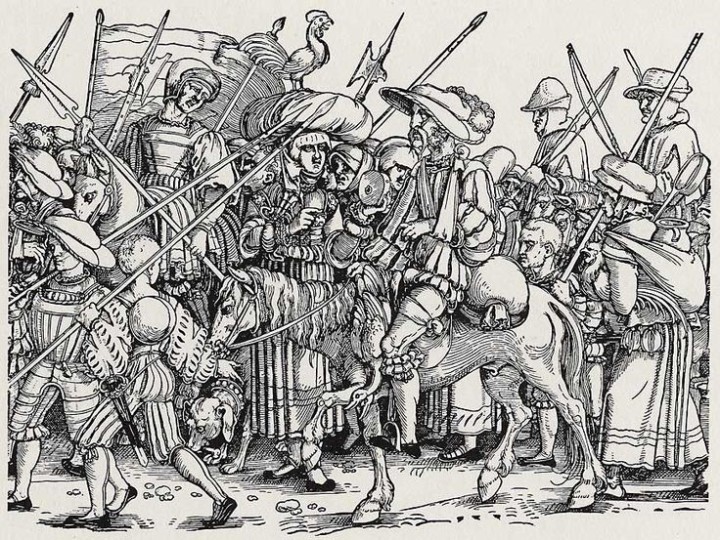 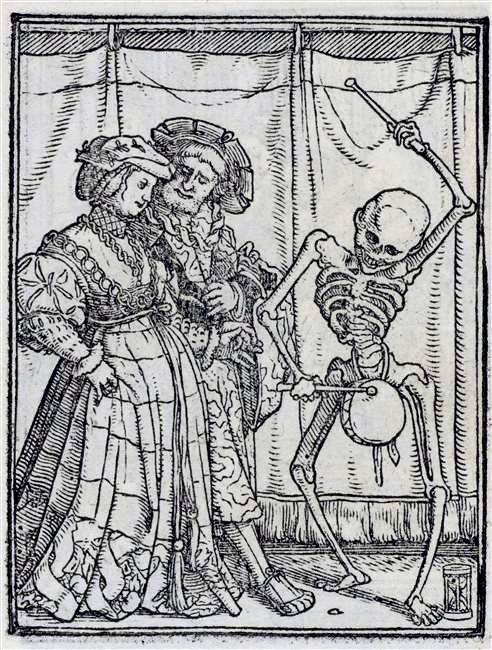 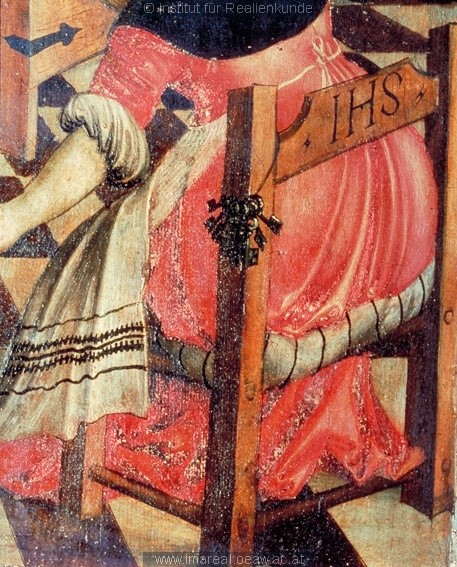 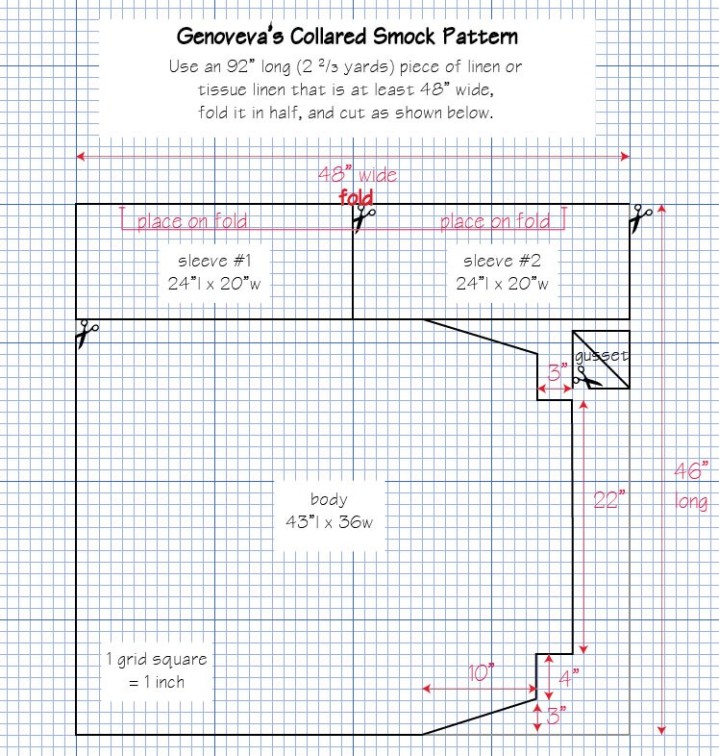 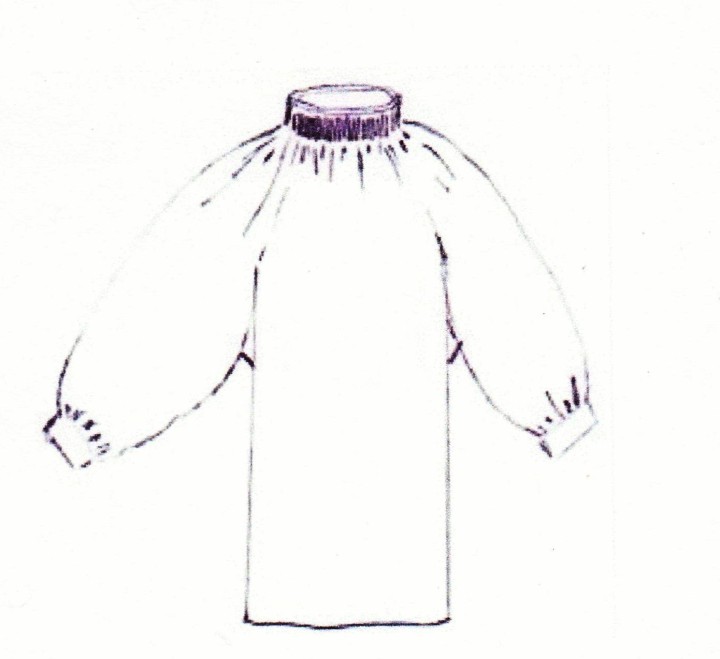 Section II: How is it made?

Both a shirt and apron (of this status) would have primarily been made of linen fabric and linen thread.  Linen shirts were made white or natural colored, while aprons were almost always white, red, or black (Textiler Hausrat, 1990).  The construction, as well as the pleatwork would have all been done with the same linen thread.  I am happy to say that I also used 100% linen fabrics and 100% linen threads to pleat and construct both of these items!

The pattern that I chose to use to construct the shirt was taken from an article (von Lubeck, 2015) and I have not yet been able to confirm its authenticity (Image 6).  The basic cut and construction are the same as most rectangular construction shirts of 15th and 16th century Germany, with the exception of the neck (Image 7).  I chose this pattern in order to cut down on the bulk that would end up in the high collar.  I was unsure how much the extra fabric would affect the structure of the collar and the neckline.  I wanted to have an open-neck shirt and most of the examples I found of shirts with the entire top pleated into the collar were for closed neck shirts.

In period there would’ve been only a few items used for this project: scissors, snips, pins, needles, thread, thimble and probably some sort of ruler or guide.  There is some conjecture (and a few woodcuts) that show that a pleating frame (Image 8) may have been used in period, (von Lubeck, 2015).  I chose not to construct and use a pleatwork frame, because I don’t think my physical limitations would allow me to do so.  I am unable to hold my arms up for more than a few seconds and the frame looks as though it is ALL arm work.  I also feel that if you were in the Tross, you would probably not be hauling around a large, upright frame just to do pleatwork.   I had to use modern needles and pins out of necessity.  I do not have period-style scissors, but did use a pair of forged snips which I often use for hand sewing.  I did not use a thimble, because I never do!  The linen thread I chose to use my favorite for hand sewing.  It is imported from Sweden and a weight of 35/2.

In period they may have marked their “smocking dots” using either chalk, or by making a small hole in the fabric – I chose to use a modern disappearing ink pen so that I would not run the risk of my markings disappearing before I completed my project (Image 9).  Although I am unable to confirm it, I do feel that they would have had some sort of guide for measuring out their pleats.  I don’t know if it would’ve been a piece of wood with marks or holes in/on it, or if it was a piece of wood with nails sticking out at specific intervals to make the holes in the fabric (as is speculated to be the top of the pleatwork frame) (von Lubeck, 2015).   I do know that when you are marking that many dots, you need some form of guide or ruler.  For example, the distance between the marks on the shirt collar and cuffs are a very consistent 1cm.

The pleating method I chose to use for both items is “fold pleating” rather than “gravity pleating”, or “press pleating”.  I chose this method because not only is it the method I am familiar with, but I did not have to construct a pleatwork frame, or a press.  The “fold pleating” method consists of marking the fabric at the desired intervals, basting the fabric in a line using the “smocking dots” and then gathering the fabric by pulling the basting threads (Images 10, 11).  Once the threads are gathered up, the pleats can be left as they are, or further creased by pinching them between your fingers, smoothing with stones, or even starching (Nutz, 2012).  I chose to further crease my pleats by pinching them between my fingers both just after gathering and while embroidering.  The pleatwork embroidery is then done by stitching the pleats together in different patterns to create the desired effect (Image 12). 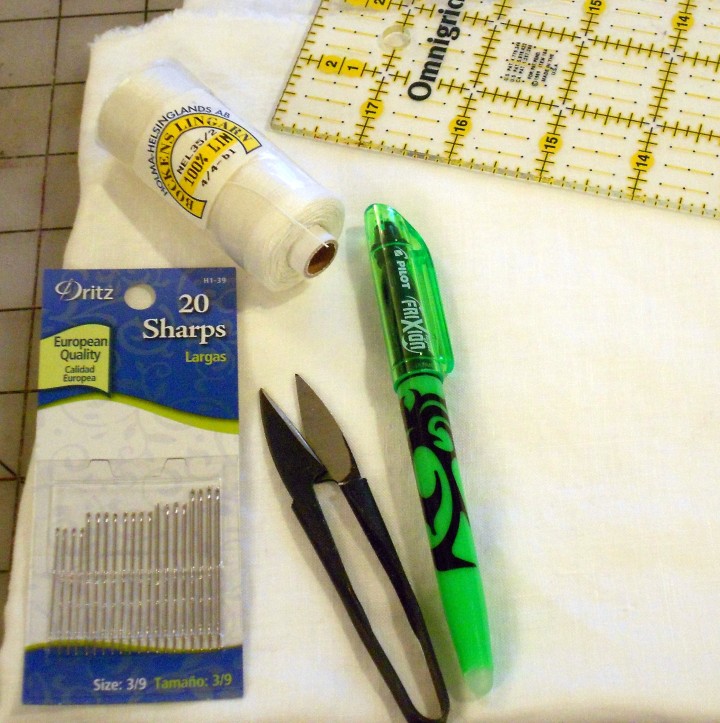 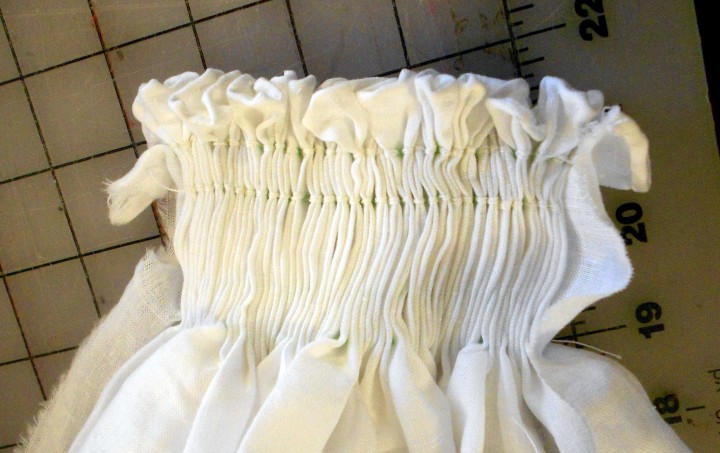 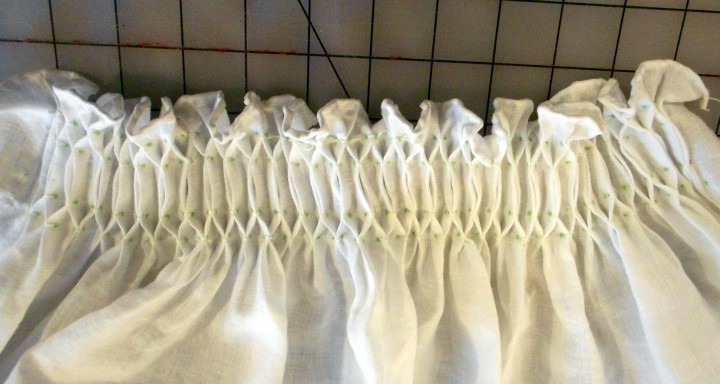 While in the planning stages of the pleatwork pattern, I did actually make several samples of the patterns.  These samples were based on different pleat depths, widths and patterns to ensure that I would obtain my desired effect (Image 13).  I also considered using a simpler pattern (the honeycomb) for the shirt due to my time constraints, but my preference for the original pattern won out!  Based upon many of the surviving woodcuts, honeycomb is a very popular (and very simple) pleatwork pattern.  It is often seen on the necklines and cuffs of shirts, as well as on aprons (as on mine) (Image 2).   In an effort to try something new, for my shirt I decided on my original pleatwork pattern of a modified (elongated) honeycomb.  In my apron, I used they honeycomb as well as the trellis stitch through the center.  I chose the trellis stitch for its more decorative effect on an otherwise fairly ordinary apron.

I chose to make both items the way I did for two reasons: it is the process I am familiar with and I achieved my desired results!  It is important to me personally that my shirt and apron be sewn by hand using period supplies and patterns because that is what I want to represent.  I enjoy the process, as well as “the look” I achieve when I am able to create an item in this way.  For me, the joy is in the doing!

I have used my apron several times and I have learned that the linen I used for the tie apparently IS NOT the same color as the body of the apron!  I did learn that not laundering the shirt linen (de Gothia) did not seem to make a difference to me when pleating the fabric.  I also learned that I hate lining pleated cuffs and collars and I may not do that in the future unless it is necessary (Image 14).  There are extant examples of lined and unlined pleated cuffs and/or collars, so I feel that I can proceed as the item dictates (Images 15, 16).

I believe that I would make the shirt differently next time as I am not completely happy with the body of the pleats.  I may try thicker weight linen, or fold over the neckline fabric to attempt to achieve a fuller appearance in my pleats (de Gothia).  I am extremely pleased with the apron and have no plans to alter it, or my apron-pleating process at this time. 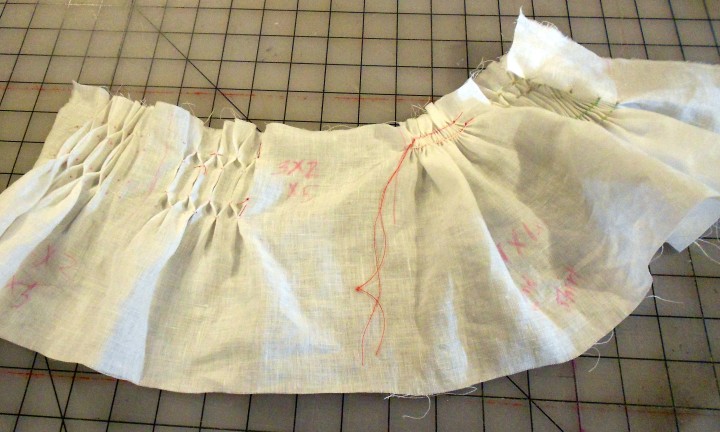 Image 13: samples made to gauge pleat depth and distance 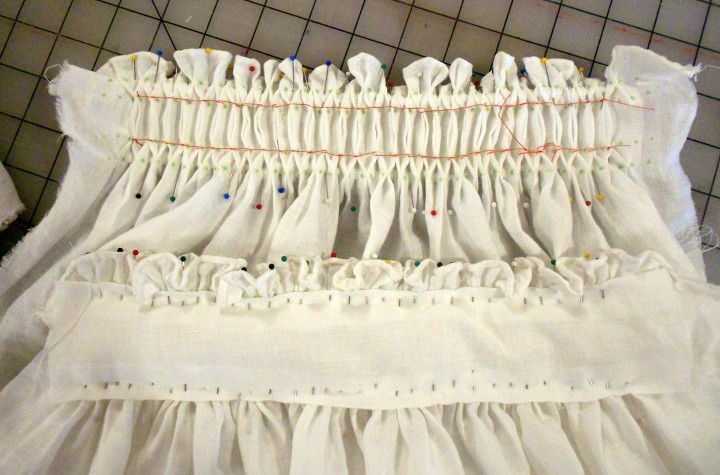 Image 14: lining the cuffs of the shirt 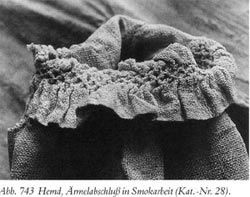 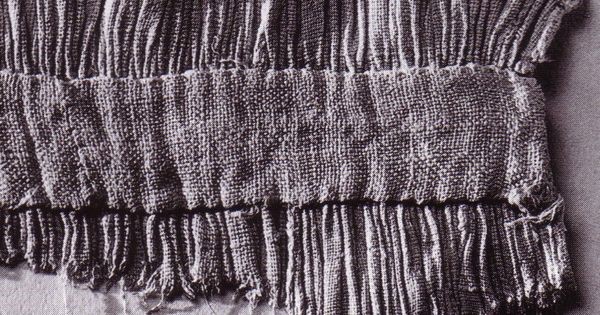 Cut and Construction of Linen Shirts, Smocks, Neckwear, Headwear and Accessories for Men and Women C. 1540-1660

Nutz, Beatrix (2012). How to Pleat a Shirt in the 15th Century: In Archaeological Textiles

von Lubeck, Genoveva (2015). “Pleatwork in the 15th and 16th Centuries: An Introduction

2 thoughts on “Smocked Shirt and Apron”

This is a text widget, which allows you to add text or HTML to your sidebar. You can use them to display text, links, images, HTML, or a combination of these. Edit them in the Widget section of the Customizer.